A Nigerian lady has narrated how her ex-fiance stole her engagement ring so he can get an excuse to break up with her.

According to @Miss_Mangolia20, she dated her ex-fiance for 4 years and he called off their engagement 6 months after. She further revealed that it was after they broke up that she realized that stealing the engagement ring was part of a grand plan.

I remember this guy I dated for almost 4 years. Dude proposed and we were engaged for about 6 months or so until one day my ring went missing.

He made my life miserable for weeks because to him, I wasn’t serious about getting married. It wasn’t until we broke up weeks later that I found out the guy stole the ring and that it was all part of a grand plan.

I’m glad I can laugh about it now but mennnnnnn, life packs a punch when she wants to hit.

Checkout :  It's official: 2019 was the second-hottest year on record 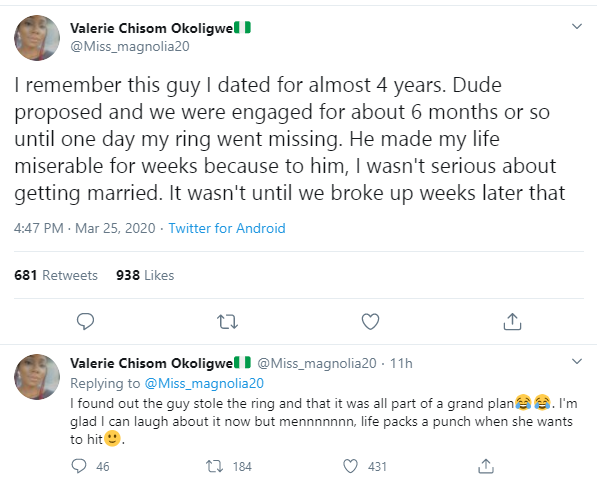 King Emvido - March 16, 2020 0
A sales boy identified as Emmanuel has been arrested by the police in Rivers State for allegedly burgling his boss’ shop and carting...

Marega Hits Out At Vitoria Fans And Referee After Suffering Alleged...