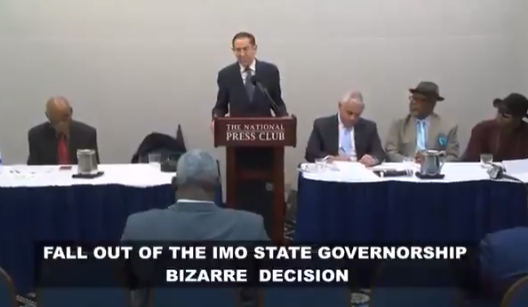 The National Press Club which is the largest propgessional organisation for journalists, has proposed a list of punitive measures against the Supreme Court Justices that annulled the election of Emeka Ihedioha of Imo state and instated Hope Uzodinma as the new governor.

Thisday reports that the club at a roundtable meeting held recently, warned that the judgment if not reversed could lead to more sanction against the judiciary, which is supposed to be the last hope of Nigerians. Outside the apex court justices, others to be considered for strong punitive measures are the leadership of the All Progressive Congress (APC) whom they believed is behind the action of the apex court justices.

According to one of the speakers, the United States recently passed a law, which empowers the president at the request of the Secretary of State and various committees’ chairmen in Congress to list persons abroad that would be denied visa, have their assets frozen and be excluded from the commerce of the United States, “if they are complicit in recognised internationally rights violations”.

In my view I think the Supreme Court justices would be at risk if this decision flagrantly tainted is not reversed and it could impact not only the seven Justices who sat in that particular case but the entire bench of the Supreme Court.

Watch a video from the roundtable meeting below

We almost gave in to pressure of marrying women – Nigerian...