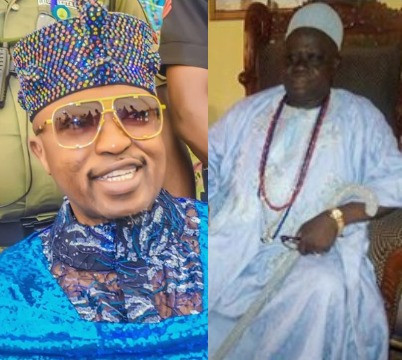 Earlier today, the Oluwo of Iwo, Oba Abdulrasheed Akanbi, was accused of beating up the Agbowu of Ogbagbaa, Oba Dhirulahi Akinropo, during a peace meeting to resolve a land tussle among monarchs within Iwo axis. Oba Akanbi was accused of attacking Oba Akinropo in the office of the Assistant Inspector General of Police (AIG) Zone 11 Bashir Makama, who convened the peace meeting which other monarchs, top police and government officers attended. Read here.

In a statement released on his IG page, the accused monarch said he was only acting on self defence as the Agbowu of Ogbagaa was the one who initially attacked him at the meeting. Read his post below

I Defended Attempt by Agbowu to Stick my Eyes After He Called Me Mad Man- Oluwo
Oluwo of Iwoland, Oba (Dr.) Abdulrosheed Adewale Akanbi, has make a clean breast of the allegation that he beat Agbowu of Ogbaagbaa, Oba Sikiru .

Oluwo stated he was truly invited by the authority of the police to make peace on his stance curtailing excess land selling by monarchs under his domain, a pronouncement that was not go down well with those affected as they regroup to act against the authority of Oluwo who gave them the crown.

At the peace meeting held at AIG office, Agbowu of Ogbaagbaa interrupted Oluwo while making his speech and called Oba Akanbi unprintable names, pointing his staff of office at Oluwo while attempt to stick the staff in his eyes was heavily rejected with force which Agbowu could not withstand.

How could a constable openly insult commissioner of police and make attempt to beat the CP? Can any monarch try such with Ooni, Alaafin?

We Don’t Need A Cage For Messi, Says Napoli Boss

50 Cent Inspired By Chris Brown To Have A Daughter

Kylie Jenner And Travis Scott Enjoy The Day As A Family.

Three dead in widespread protests across India despite bans on public...