– According to Halima, ladies should also buy gifts for their men when they have the money

In many parts of the world, the relationship between men and women is skewed in the sense that the guys are set up to always give while the women receive.

In recent times, this has led to men feeling unappreciated or regarding some women as being selfish for always being on the receiving end of gifts.

Well, Nollywood actress, Halima Abubakar, has used her Instagram page to teach her female fans how to treat the men in their lives.

According to the filmmaker, ladies should also spend on their men especially when they have the money. She added that it is not a big deal. 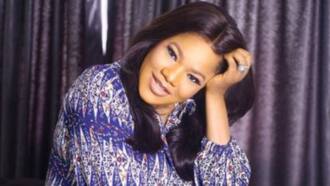 In her caption, she wrote: “If you have money babes spend some on your man too. It is not a big deal❤️buy him everything. Type Ameen if you want to be successful and kind”

In other news, Legit.ng recently reported on BBNaija 2018 star, Khloe, who shared her take on the kind of man she wants to get married to.

According to the star, she cannot marry a man who does not have at least three cars, two houses and two stable businesses.

Explaining further, Khloe said she and her siblings suffered enough when growing up and she would not want to bring kids to this world if she and her husband cannot take care

US troops knew Al-Asad air base would be attacked and sheltered...