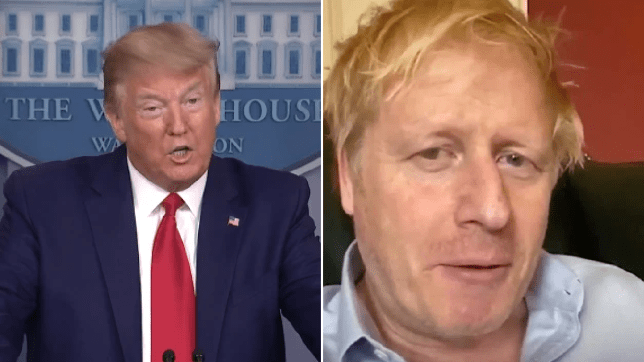 US President Donald Trump has revealed he’s asked drug companies to help out UK Prime Minsiter Boris Johnson as he battles with Coronavirus.

Johnson, 55, who tested positive for the disease almost two weeks ago, was moved into the Intensive care unit on Sunday and placed on Oxygen on Monday and now Trump a friend of the UK Prime Minister has revealed he has spoken with some ‘genius’ drug companies to intervene and help out Boris’ treatment.

‘We’re very saddened to hear that he was taken into intensive care this afternoon, a little while ago and Americans are all praying for his recover,’ Trump said at his coronavirus briefing on Monday night.

‘He’s been a really good friend…we have made tremendous progress on theraputics…and I’ve asked two of the leading companies, these are brilliant companies – ebola, AIDS, others – the’ve come with the solutions and just have done incredible jobs.’ ‘

‘And I’ve asked them to contact London immediately, they have offices in London, these are major companies, but more than major, more than size, they’re genius,’ Trump continued, saying that he spoke to four companies.

‘We’ve contacted all of Boris’s doctors and we’ll see what is going to take place…but when you get brought into Intensive care that gets very serious.’